A Muslim is someone who follows Islam.

To formally become a Muslim, a person recites the shahaadah (testimonial of faith) which in English means: “I bear witness that there is no one worthy of worship but God and Muhammad is God’s messenger.”

This testimonial unites Muslims around a common ideal: to relate all aspects of their lives to the Creator (thus making their whole existence a form of worship) and to do so according to the teachings of God’s Prophet, Muhammad.

With this very special bond, Muslims have formed what may be considered the largest and most far-flung human “family” in the world. From the center of the world—Arabia—to the corners of the West and the East, God formed the first and only true world civilization humanity has ever known. Completely unrelated cultures united upon the only thing that really can bring people together in a deep way, a common faith.

Such a faith had to be about what naturally appealed to all human beings—worship of the Creator and common sense teachings that encouraged righteousness, universal brotherhood and justice for all men and women (including non-believers).

Though of course humanity tends to stray from divine truths, the fraternal teachings of Islam continue to resonate in deep ways among the vast majority of Muslims. For this reason a Muslim from Europe can travel to Africa, Arabia or China and encounter fellow followers of his creed and feel immediately at ease in their company—almost as though they’re related. Even non-Muslims who’ve spent a lot of time with Muslims have felt this and can testify to the intense relational energy Muslims often have with each other—regardless of race or ethnicity.

For at the heart of what moves, inspires and guides them all in the journey of life is the simple yet infinitely profound experience that is Islam.

“O mankind! We have created you from a male and a female, and made you into nations and tribes, that you may know one another. Verily, the most honorable of you with God is the most God-conscious of you.(Qur’an “The Dwellings” 49:13) 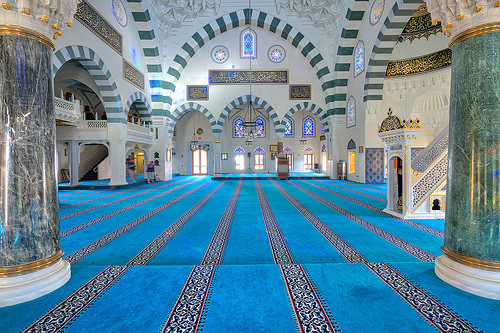 It is not surprising thus that only with Islam has imperfect humanity ever approached the perfect beauty of universal brotherhood, free of the bigotry of color and parentage:

“It [Islam] possesses a magnificent tradition of inter-racial understanding and cooperation…No other society has such a record of success uniting in an equality of status, of opportunity, and of endeavours so many and so various races of mankind.”1–Sir Hamilton Gibb (Foremost Western Historian of Islam, Oxford/Harvard Universities)

“The extinction of race consciousness as between Muslims is one of the outstanding achievements of Islam, and in the contemporary world there is, as it happens, a crying need for the propagation of this Islamic virtue.”2–Arnold J. Toynbee (Leading World Historian of 20th century, London School of Economics)

The Quran actually tells us to honor ethnic diversity as a sign of God:

“And amongst his signs is the creation of heaven and the earth, and the diversity of your language and colors; Verily, in these are signs for those who have knowledge.“ (Qur’an “The Romans” 30:22)

So instead of replacing cultures and traditions with a new one-size fits all suit, as we sometimes see today with Western popular culture which is often resented and even toxic to indigenous societies, Islam integrated itself into pre-existing cultures and invigorated them with its teachings and spirit, leaving much of the native ethos intact. This allowed cultures to continue their internal dynamics yet retain the Islam within them. Moreover, countless cultures and subcultures survived annihilation because of the resiliency and pride Islam instilled within them.

Today you will find Muslims over vast expanses of the globe, of countless ethnicities and very different cultures who nonetheless share a common perspective on life, the universe and worship. They are a grand family because Muslims unify their myriad thoughts, feelings, toils, beliefs, devotions and aspirations all into God. For Islam is the unification of all these key components of humanity’s individual and collective consciousness into the transcending unity of God.

It is humanity’s best hope for union.

“…If you had spent all that is in the earth, you could not have brought their hearts together; but God brought them together. Indeed, He is Exalted in Might and Wise.” (Qur’an “The Bounties” 8:63)