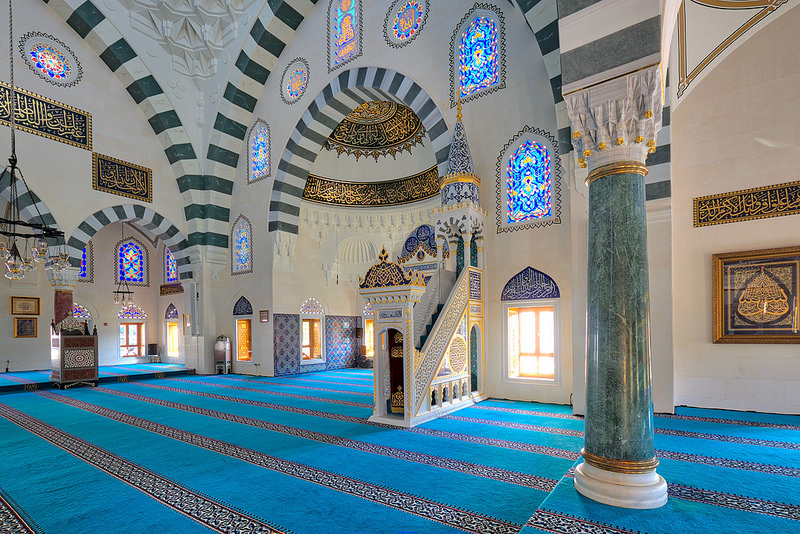 Though obviously we cannot cover all the Quran addresses in this short piece but below are some passages from it on various topics. (Translations are from Quran: A Short Journey1)

This is the Book in which there is no doubt, containing guidance for those who are mindful of God, who believe in the unseen, keep up the prayer, and give out of what We have provided for them; those who believe in the revelation sent down to you [Muhammad], and in what was sent before you, those who have firm faith in the Hereafter. Such people are following their Lord’s guidance and it is they who will prosper.   [Chapter 2, Verses 2-5]

“If We had sent this Quran down to a mountain, you would have seen it humbled and split apart in its awe of God: We offer people such illustrations so that they may reflect. He is God: there is no god other than Him. It is He who knows what is hidden as well as what is in the open, He is the Lord of Mercy, the Giver of Mercy. He is God: there is no god other than Him, the Controller, the Holy One, Source of Peace, Granter of Security, Guardian over all, the Almighty, the Compeller, the Truly Great; God is far above anything they consider to be His partner. He is God: the Creator, the Originator, the Shaper. The best names belong to Him. Everything in the heavens and earth glorifies Him: He is the Almighty, the Wise.”   [Quran 59:21-24]

Creation of the Universe

Are the disbelievers not aware that the heavens and the earth were once fused together in a single piece, and then We split them apart? We made every living thing from water? So won’t they believe? And We put firm mountains on the earth, lest it should sway under them, and set broad paths on it, so that they might follow the right direction, and We made the sky a protected ceiling, but they, from its signs, are turning away. It is He who created night and day, the sun and the moon, each floating in its orbit. We have not granted everlasting life to any other human being before you either [O Muhammad] – if you die, will [the disbelievers] live forever? Every soul is certain to taste death: We test you all through the bad and the good, and to Us you will all return. [Chapter 21, Verses 30-35]

Say, [O Muhammad], “O people, if you are in doubt as to my religion – then I do not worship those which you worship besides God; but I worship God, who causes your death. And I have been commanded to be of the believers and [commanded], ‘Direct your face toward the religion, inclining to truth, and never be of those who associate others with God ; and do not invoke besides God that which neither benefits you nor harms you, for if you did, then indeed you would be of the wrongdoers. And if God should touch you with adversity, there is no remover of it except Him; and if He intends for you good, then there is no repeller of His bounty. He causes it to reach whom He wills of His servants. And He is the Forgiving, the Merciful. Say [O Muhammad], “O People, the truth has come to you from your Lord, so whoever is guided is only guided for [the benefit of] his soul, and whoever goes astray only goes astray [in violation] against it. And I am not over you a manager.” And follow what is revealed to you, [O Muhammad], and be patient until God will judge. And He is the best of judges.   [Chapter 10, Verses 104-109]

“And the believers, men and women, are protecting friends one of another; they enjoin the right and forbid the wrong, and they establish worship and they pay the poor-due, and they obey God and His messenger. God will give His mercy to such people: God is Almighty and Wise. God has promised the believers, both men and women, Gardens graced with flowing streams where they will remain; good, peaceful homes in Gardens of lasting bliss; and– greatest of all–God’s good pleasure. That is the supreme triumph.”   (Chapter 9, Verses 71-72)

By the night when it covers, by the radiant day, by His creation of male and female! Truly, varied are the goals (for which you strive).  There is the one who gives, who is mindful of God, who testifies to goodness, We shall smooth his way towards ease. There is the one who is miserly, who is self-satisfied, who denies goodness. We shall smooth his way towards hardship and his wealth will not help him as he falls. Our part is to provide guidance, this world and the next belong to Us.  [Chapter 92, Verses 1-13]

Truly, in the creation of the heavens and the earth and in the alteration of night and day are signs for people who think deeply, who remember God while standing or sittingor [lying] on their sides and give thought to the creation of the heavens and the earth,[saying]:”Our Lord! You have not created all this without purpose– You are far above that! – so protect us from the torment of the Fire. Our Lord! You will truly humiliate those You commit to the Fire. The evildoers have no one to help them. Our Lord! We have heard someone calling us to faith–‘Believe in your Lord’– and we have believed. Our Lord! Forgive us our sins, wipe out our bad deeds, and grant that we join the righteous when we die. Our Lord! Bestow upon us all that You have promised us through Your messengers– do not humiliate us on the Day of Resurrection– You never break Your promise.” Their Lord has accepted them (and will comfort them by) saying “I’ll never let the efforts of any of you who made an effort (on behalf of God) become lost, be he male or female, for you’re equally from each other. I will certainly wipe out the bad deeds of those who emigrated and were driven out of their homes, who suffered harm for My cause, who fought and were killed. I will certainly admit them to Gardens graced with flowing streams, as a reward from God: the best reward is with God.” (Chapter 3, Verses 190-195)